Buckle up, think of your love ones...

An article from The Star Newspaper:

(Use the rear seat belt now.) Otherwise the police will stop you, question you and give you a pep talk.... DATUK SURET SINGH

KUALA LUMPUR: The 60-day countdown to the compulsory use of rear seat belts has begun.

Starting today, authorities will conduct daily operations to ensure rear seat passengers buckle up before it becomes compulsory on Jan 1.

Road Safety Department director-general Datuk Suret Singh said motorists must ensure passengers wear their seat belts if they did not want to have an interrupted journey.

“Otherwise the police will stop you, question you and give you a pep talk,” he told reporters after carrying out a road safety advocacy campaign on the Sungai Besi highway here yesterday.

Suret Singh said a survey among 2,000 respondents found that 70% to 75% were aware of the importance of wearing rear seat belts.

“However, 60% said they would start using them only when it becomes compulsory while 80% are not even aware that it will come into effect on Jan 1,” he said.

He also cautioned parents against having children under five wear adult seat belts and advised them to use child safety seats instead.

“As for those between the ages of five and 10, they can use the adult seat belt but will need a booster for height,” he said.

Suret Singh said that Proton and Perodua would be announcing in early December the schedule for the free fitting of rear seat belts for cars that do not come with them.

He said motorists with such cars need not rush to fit the rear seat belts as the department had given the manufacturers three years to ensure all such cars were fitted with rear seat belts.

Because 80% of Malaysians were not aware of the implementation of compulsory rear seat belts, which will come into effect on Jan 1 2009, i shall blog about this today.... In fact, if you drive a Proton/Perodua, there will be free fitting of rear seat belts this December for cars with no rear seat belts.

"A body continues to maintain its state of rest or of uniform motion unless acted upon by an external unbalanced force."

Understanding this law, something of which we would have learned during physics lessons in high school, we should understand that when a car suddenly stops, (whether in a crash or emergency brake), the occupants will continue moving in the fast initial velocity and will either

1. be crashed into the vehicle structure

2. be thrown out of the vehicle and crash into a wall/road/another vehicle/ other static objects/etc

3. crashed into the other front occupants

The front seat belts only prevent the formal two, having both front and rear seat beats on would prevent all three.. The middle rear seat passanger can also be prevented from being thrown out with rear seat belts. In a collision (even at a mininum of 50kmph), any occupant in the vehicle will be thrown forward with a force of between 30 to 60 times their own bodyweight.

Let's say you weight an average weight of 50kg,

or perhaps a more precise calculation:

{acceleration = currant velocity minus initial velocity, then divided by time}

that's the amount of force you put on the driver/passenger in front of you!

Now you see, the impact you could have towards your front driver or yourself..... To solve this problem, there is only few solutions:

2. Reduce the 'm' - Loss weight? haha! another benefit of weight reduction, i suppose.....

Restrain systems, eg seat belts are designed to help keep people in the vehicle, away from the vehicle structure and other occupants, and to distribute the forces of a crash over the strongest parts of the human body, with minumum damage to the soft tissues..

In fact, countries like Hong Kong, had understood the benefits of wearing rear seat belts and had implemented this rule much earlier.

There is however a set back : The adult seat belt is designed for people 1.5m or mote in height. Therefore, for children/babies, an appropriate child restraint includes a baby carrier, child seat, harness or booster seat suitable for the child’s weight is necessary. I hope the government would take this into consideration.

Do make a point to make sure everyone in the car has their seata belt on before driving.

Final words from me : Buckle up, think of your love ones... 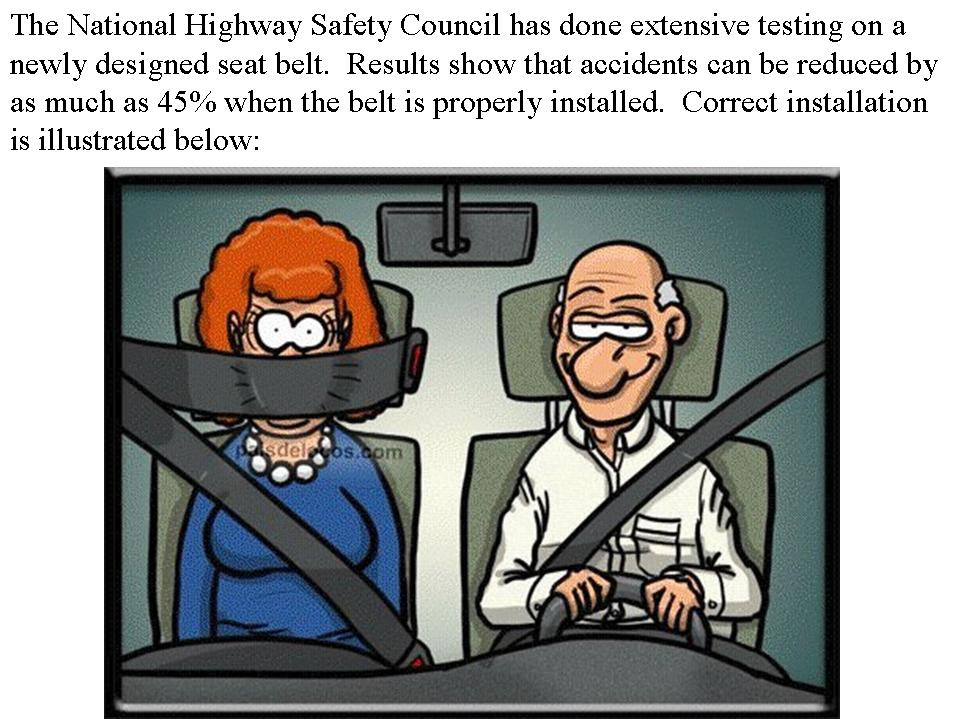 confessed by confessions of a medical student Time Of Birth 11:39:00 AM