Stories from my childhood

(meanwhile, here's something from my draft box, written quite some time ago,which was not posted as it was rather boring, and i have not started doing what i wanted to, yet) 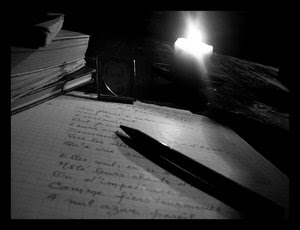 (photo : Writing, by Ruruw, from deviantART)


I started reading at a very early age. I remembered that I started kindergarten at the age of 3, which now, I realized, was a relatively young age. Simply because, I had working parents. So, I was sent to a babysitter and later to a nursery, and at 3, to a kindergarten. And I took a public bus to kindergarten, something that I was once very proud to announce. Surprisingly, unlike my other siblings, I never refused to go to kindergarten. I wondered whether was it because the attachment I had, was not that strong…

Anyway, like I was saying, I started reading at a very young age. We had to read the series of ‘Peter & Jane’ in kindergarten, and to complete it upon graduation. Every morning, the teacher would make each one of us read, at least a few pages, and for every satisfied reading, she would award us with a star, sometimes even stickers, things which were treasures to little kids. My love for books grew and became more apparent in upper primary school, when I had to switch schools, from Subang Jaya to Seremban. Saying goodbye to friends was not easy.
I did not really like the new environment. I was late to school every morning and refused to do my homework, which later I learnt that children would act the way I did when they are unhappy, unsatisfied or rebellious. Medical school later taught and helped me understood more of me during my childhood.

My friends at primary school labeled me as a ‘bookworm’. And one have to love books so much to be ‘awarded’ such title. I was caught by the teacher, several times in fact, for reading under my desk during class. She must have been in dilemma: should she to punish me for not paying attention in class? Should she punish me for doing something which she encouraged other student to do? She punished me anyway.

So, I was not much of a people person, when I changed school. My adaptation skill was not that great. Changing school was not something children, in general, cope with easily. And so, I was just being part of that general population. Somehow, I found comfort in books. I completed the whole series of Enid Blyton’s. (Yes, I did!) And when the school library could no longer satisfy me, there was of course, the state library, a new heaven for a 10 year old kid. I loved Shakespeare, which you might think was pretty odd and boring for a primary school kid. Then later, there was the Sweet Valley and Fear Streets Series, which was further encouraged by my reading buddies in high school. We must have been such a bunch of ‘bookworms’ back then, were we?

Like I said, I did not quite like the new environment. I tried searching for my old friends, their addresses in my small, rugged, partially torn, dog-ear-ed, address book. And I tried making new friends, using very few verbal words. And that was when I started writing. And I found comfort in writing.

I write fiction story best. Correction: back then, I only wrote fiction. Partly it was because, that was what required in our English syllabus. Though later I noticed, my stories, the plot I wrote, were very much similar. There had to be someone who falls and love, and someone who died. Somehow, stories like that seemed to pacify my English teacher and earn me that A or star… Thinking back of it now, those stories, were kind of bizarre.

I still remember the story I wrote for my 1119, it was about the rain, and the dark, and the fear, which I was feeling that very time, as I wrote each word down. It took me some time to imagine the plot, before I put them down into words, and I guess, that pacified the examiners too.

And I of course I still remember the infamous ‘rain’ story. How could I forget, when my friend, Suk Teng, constantly reminded me of it. And yes, in that story, someone fell in love, and someone died.

I find it harder to write these days. I cannot remember the last time I wrote something fiction. I guess it all stopped when I stepped in to university. And I grew out of childhood fantasy and dreams. I missed English lessons, I really do. I missed Mrs Lim Swee Boon, who taught us literature. And I missed writing stories, fiction. Perhaps, when one finds time, one shall write again… one shall once again, let the imagination go wild, and the fingers take over the mind.
confessed by confessions of a medical student Time Of Birth 1:31:00 AM

Email ThisBlogThis!Share to TwitterShare to FacebookShare to Pinterest
Classified shinyin, stories from my childhood