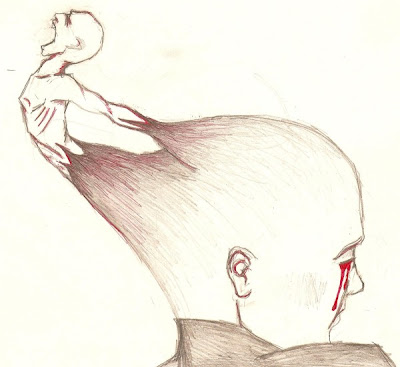 (painted by by Haley N. 'Everlorn' Baker: The main illustration for a school project on schizophrenia. Some have said it's my most emotional piece. I know it's one of my darkest)

Allow me to share with you, a story of one of my patients. The name has been changed to ensure confidentiality.

I killed myself today. This was my third attempt. It started this morning, when I was minding my own business. Amy scolded me again, ‘You useless fool! You have been bad, looked what you have done!’ ‘The policemen will find you’ Patrick added. ‘He might as well die. The world does not need a man like him’ Amy continued. 'Even your mother does not want a son like you!’ I could not understand why my friends could say such harsh words. I tried to shoo them away, but they were very stubborn and intrusive. I tried to talk to Jane, my sister, but she was asleep and she dismissed me. I could not take it anymore, so I decided go for a walk to relax. Maybe some fresh air would help, i thought.

The day was unusually moody today, the dark clouds roomed the sky of Kuala Lumpur. I had a feeling, something was going to happen. And true enough, I suddenly heard a sharp noise, more like tyres screeching - an emergency brake. There was a young man, unconscious, lying on the street, covered in blood. He was knocked by a car. He looked very familiar but it took me a while to register.

It was Benny, my next door neighbour.

The scene was horrifying, I froze a while, not knowing what to do. 'Call the ambulance' someone shouted, which I obediently did.

I later found out that it was an attempt suicide. This news took me by surprise as this young, 16 year old bright handsome boy, had a future ahead of him. Why did he end up this way? I wondered. I tried talking to him later in the wards, and learnt his story...

It started when I was 14 and my parents filed for a divorce. I could not understand why they did not love each other anymore. My mother, she left me for Britain. Does she not love me anymore? Have I done anything wrong?

My life was miserable, my friends, they left me one by one. Even my girlfriend broke up with me. The only friends I had was Amy and Patrick.

My life before was not the way as you see it now. Before my parents divorced, I used to be a friendly cheerful person. I loved video games. In fact, I played hockey for the school team. However, after the event, I was depressed, most of the days. I find it very difficult to sleep, my clothes became looser as I lost weight. I could not concentrate in school, and my results were lacking, in fact, I was failing my subjects. I became tired easily and did not feel like moving. Video games did not interest me anymore and I quitted from the school hockey team.

My friends abandoned me. But it was okay, I still had Amy. But my doctor, my family, my friends, they did not approved of my new friends. They called them ‘my hallucination’. I have never seen Amy or Patrick before, but I can hear them...

The doctor later diagnosed Benny to have Schizophrenia with depressive features. He was having auditory hallucinations and running commentaries which were degratory in nature. He also had persecutory delusions and believed that people were trying to harm him. When watches the television or listening to the radio, he had delusion of reference and believed that the messages were related to him. These had made him afraid and scared. The voices disturbed his sleep and he often wakes up crying because of this.

Schizophrenia (pronounced /ˌskɪtsəˈfriːniə/), from the Greek word meaning 'the split mind', is a psychiatric diagnosis that described a mental disorder characterized by abnormalities in the perception or expression of reality. It most commonly manifests as auditory hallucinations, paranoid or bizarre delusions or disorganized speech and thinking in the context of significant social or occupational dysfunction.

About one out of 100 people suffer from schizophrenia, more commonly among the young population. The society stigmatized schizophrenia patients as ‘mad’ or ‘crazy’ which made them isolated and ashamed to seek treatment. Schizophrenia is a disease like any other, eg: diabetes, hypertension, which required treatment. In simple words, there is an imbalance in chemicals and neurotransmitters in the brain, resulting in the symptoms seen. These can be managed with medications and psychotherapy.
When managed early, a person restore his social and occupational function, and live a life...

We should not stigmatized schizophrenia patients, for they too, need our support and help... 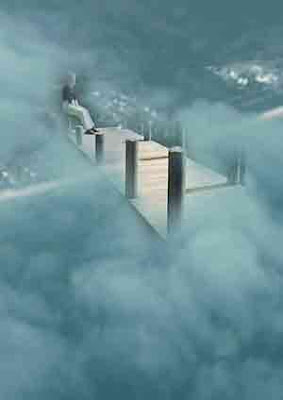 confessed by confessions of a medical student Time Of Birth 11:57:00 PM

Email ThisBlogThis!Share to TwitterShare to FacebookShare to Pinterest
Classified Confessions of a medical student-Final year, medical