When *JC in da house* met *Confessions of a medical student*

(Sook Jiuan, I malas to think of a title, so just curi yours, hehe..) 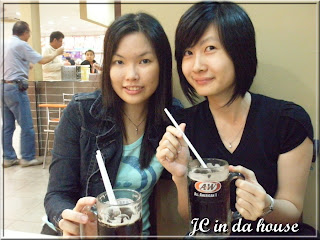 (picture from JC in da House)

Last Christmas holidays, I met Sook Jiuan and Boon Lee, my good old friends from high school. And the day before, I had lunch with Boon Lee, Xiang Ying, Suk Teng and Jack. Meeting them brings back all those good old memories… Many had changed but some things are still the same after all.

And yesterday, I was surprised to see that Sook Jiuan had blogged about it! Such a pro blogger!!

As you all probably had already known BoonLee from the previous post : Happy Birthday, Boon Lee!, allow me to introduce Sook Jiuan aka Joanne (JC in da house). I like to call her Sook Jiuan because I think it’s a beautiful name, and that’s how we used to call her back then, in KGV.

We were classmates in form six. How I missed our beloved school, SMK King George V (KGV)… i'll like to comment about what Sook Jiuan said, about KGV being the top school... well, academically, not always,.. i came to realize that there were many other schools across Malaysia with even more outstanding academical performance!! but i still liked KGV.. well, at least, i didn't have to grow up in a stressful environment that a student's worth is measured by the numbers of A's in your report card.. mind you, there were times i almost failed my school exams... but, our teachers were very encouraging...

i grew up in an environment where i had never witness a fight in my school before... or watch any student smoke in the toilets.... the biggest offense i suppose is students not wearing their nametags!! well, occasionally, some students skip school, but usually it's to stay home and study for exams.. okay, now you think i come form a school of nerds... it is just that people around here happened to be nice, that's all~

i missed the good old teachers, classmates, friends… I can go on forever, just talking about my high school life… Lower six Iskandar- that was our class, with Mr Foo being our supervisor.

Sook Jiuan is one of those pretty girls in class, you know, the kind that guys would go like: ‘Gosh, I wished she were my girl~’ *wink* She’s so sweet, soft-spoken and friendly. And she's very cool to be with! I remembered those days we were all crazy over Jay Chow... yeah, those times i had ShinLoo to translate song lyrics for me to han yi pin yin, hehe... and you, me and Shin Loo would all like go crazy during class breaks.. good to hear that you are still such a loyal fan.. while, sadly, i started losing him, as his songs became more complex and harder for me to understand..

Remember the times we had so much fun at English Fest, Telematch, etc.? Our class, for some unknown reasons, keep on winning lots of prizes and hampers... how nice... sharing it around...

and i remembered you had really neat and pretty handwriting, as we used to write to each other when we first enter university...

it has been like, how many years? 6 years.. wow! time flies~ and now you are working already, in Singapore... meeting up old friends brings back good old memories... take care my friends~

Love, at the very beginning it's always sweet
There's always a person to be there for you, to share everything with you
You're not alone anymore, at least there's a person who loves you, who thinks of you
Whatever you do,
Long as you're together, everything is well
But then, as you know each other better,
You'd begin to notice his flaws
Thus problems arise one after another
You begin to feel troubled, tired, and you want to escape
People say it's like picking up little pebbles
You want to pick up The One that's suitable for youself
But how would you know when you'd find one?
If she's The One for you, are you The One for her?
Well, love is like polishing pebbles
When you first picked up the pebble, you may not feel satisfied
But humans are flexible
A lot of things can be changed
Long as you have the heart, and courage
If you want to go around picking up unknown pebbles,
Wouldn't you rather polish up the pebble that's already in your hands?
People think because the feeling subsided
Thus they become lazy
Wrong!
It's actually people tend to be lazy
And causes the feeling to subside

In a dinner gathering, at one point someone mentioned that eating shrimps is good for health
A middle-aged man then said, "Ten years ago, when my wife was still my girlfriend, if she said she wants to eat ten shrimps, I'd peel twenty for her. Now, she wants me to do that? No way! I don't even have interest to take off her clothes."

Understand?
It's no wonder why people nowadays don't fancy an early marriage
This is because, marriage makes people lazy
If everyone is
Lazy to talk
Lazy to listen
Lazy to create surprises
Lazy to be gentle and considerate
Then I'd be surprise if they don't go their separate ways
So please remember
An active romantic relationship
Needs sufficient nourishment
To be in a relationship
You can't be lazy

A couple had decided to go for a dinner after work. But the girl was late because of an office meeting. She was wet from the rain and was late for 30 minutes. Her boyfriend was very unhappy and said, "You are always like this. I will not wait for you anymore." At that moment the girl totally broke down, she thought, "Maybe, we don't have a future together."

The same situation, same place, same time. The girl was also late for 30 minutes. Her boyfriend said to her, "You must be very tired." He then wiped the rain water from her face and put on a coat for her. At that moment, the girl cried too. But the tears that rolled down her cheeks are warm, so as her heart.

Can you understand?
Between love and hate, there's just one fine line.

Love needs forgiveness and timing. It all depends on how you think.
When a person falls in love with you, and you think he's a fine guy
That doesn't mean you'd pick him
You say, "I want to find a guy whom I love very much, before I can commit."
But when asked, how would you consider that you love very much?
You may not be able to answer, because you can't

That's right. We always think we'd find the person whom we love very very much.
But when we look back, we'd find ourselves were indeed very naive
If it was never started, how would you know you wouldn't love him very very much?
The feeling of love is being discovered, only after you've been with him through ups and downs
You're hoping to find The One
But maybe, just maybe, someone has already been there all along, just that you never noticed.
So, take a look around
Maybe he's been waiting for a very long time

When you love someone, love him 80%
The hopes and expectations, make them 80%, the remaining 20% is for you to love yourself
If you love him too much, you may form a kind of pressure, causing both to suffocate

A friend once asked me, "How do you love someone?"
I told him,"Everyone has a different perception for love. I wouldn't want to mislead you."

Best wishes for all the lovebirds in the world
confessed by confessions of a medical student Time Of Birth 11:01:00 PM

Email ThisBlogThis!Share to TwitterShare to FacebookShare to Pinterest
Classified about love and relationships, inspirational, stories from my highschool (KGV), zhimuis