For the first time, I did not have baby to accompany me to Teluk Intan. He was still at the workshop, sigh.. Basically, I only packed 4 days clothes, as I was hoping to be back by Wednesday, to celebrate Christmas, hehe… And Aland was kind enough to tumpang us down.. We had the infamous Bidor’s Duck Noodles for dinner.. and the tasty, ‘woo kok’.. click here for pictures. Wonder whether will I be missing this..

I was sharing a house with Cheryl, Susan, Kuan Geok, Shu Juen and Sheau Yin- in the same house I stayed the 3 previous times! 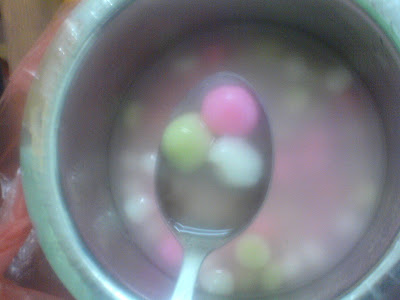 At the strike of 12, we celebrated Cheryl’s birthday (again!) with some mild lychee volka, gin tonic and some chips… and spend the whole night playing truth or dare, spin the bottle. Ooo… it’s so nice revealing secrets, hehe…. But let’s keep that between the 4 walls ya.. ^^

Nothing much, the usual first day syndrome, you don’t really feel like doing anything. Followed the rounds, attended clinics.. Dr Tay, the MO at HTI, a ex-UKM Graduate, was very nice to teach us during his clinics. He was very knowledgeable, makes me feel like we all should study harder. At the end of the clinics, we found out that Dr Tay and QKK’s sister were course mates! Other details, I was not too sure about it, so, I shan’t elaborate on it.. hehe..

6 of us crammed into Yu Zhi’s MyVi as we headed to T-Corner for lunch. This is a very nice place. I would highly recommend the French Fried Rice – delicious! I liked it with a cup of Earl Grey’s. Today, there was a ‘Christmas’ Promotion though. They were selling fried rice set (fried rice+ fried chicken with sauce+ fried egg + some vegetables) which cost only RM 1.99!! can you believe that? And drinks (ribena or orange juice) cost only RM0.99! making it a total of RM2.98!!! It’s been a very long time since I last had a decent meal which cost less than three ringgit, inclusive of drinks. (sorry, forgotten to take pictures, i am a failed blogger... but I remembered primus blogging about this place before.. he didn't take pics of the food though, sigh.. )

Dinner at a Riverview Seafood Restaurant. I think the food was just okay. Pictures with Bobo. (maybe,will post next time)

Oh yes, there’s one thing, I ‘so-must’ blog about.

Today, I did one of the stupidest things in Teluk Intan. Correction : We, all four of us : Honey, Shu Juen, Aland and I. I mean, it was Cheryl’s birthday, so we had to do something, right? So, guess what?? We went to the most ‘uncle’ karaoke in my life!! At least, that was what we thought. The place was called ‘Angel’ – above KFC. 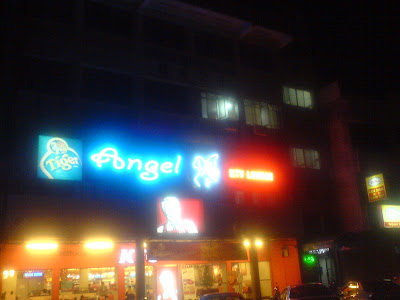 I suppose there must have been many people singing like angels in that place. 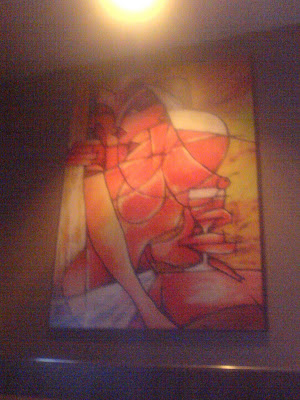 Apparently, the place isn’t THAT uncle after all. I mean, they still had songs from our generation : Westlife, BSB, Shania Twain, MLTR, etc – perhaps, it was just us, getting older... The KTV was free, and you were only charged on drinks.. there was even a dance floor, (with the round disco light,haha) but no one dancing though… and guess what? We were the youngest people there!! the place was quite quiet… there was an uncle singing at the background. Nevertheless, we took the deluxe room, which cost like RM80.

The room was quite okay, just a little pricy, I thought. The auntie later gave us a discount and only charged us RM30 for the room. This kinda thing, only happens in Teluk Intan, I suppose, never in KL. The only thing I don’t like about the place was it was too smoky… I mean in Redbox, Greenbox, Neway, or other karaoke, you don’t go home with your hair smelling of cigarettes, right? Cigarettes should be banned in all karaoke!!

I attended the Day Care OT today. I was shocked to see how the doctors here removed cysts and fibroadenoma, all under local!! Back in HUKM, you would need to book an Operation Theater and have an anesthetist stand by. I remembered observing Prof Rohaizak who did a removal of left Fibroadenoma of one of his patients under GA (General Anesthesia), as the patient requested to be sedated. And today, I saw not one, but two cases of fibroadenoma excision performed under local anesthesia!! Wow! Later on, I heard from Mr Vasu, that in peripheral hospitals, they can perform minor operations like hernia repair, under local as well. The surgeries at the minor OT, was swift, very swift.. in less than 2 hours, I saw 7 cases!

We had dinner at Al-Fresco today. It was Chew Yong’s birthday. (Happy birthday, CY!) Al-Fresco was a great place. Can you believe it, a steak house in Teluk intan?!?? And the thing is, the food here actually taste good, and the presentation is good too- can fight those steakhouse in KL, seriously.. I was like, ‘why didn’t we discover this place earlier?’ 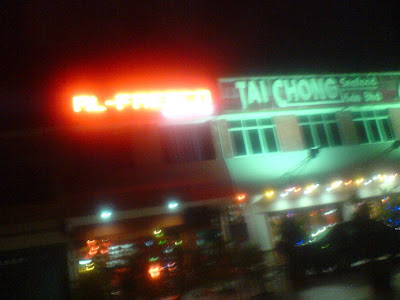 It was difficult to take pictures as the lights were very dim. Pictures with Bobo.

I had lamb shack grilled – awesome!

After the dinner, I did (correction: We did) another stupid thing. We were late for our night class with Mr Vasu. –part of the consequences of bringing classes forward. There was this myth that Mr Vasu would canceled classes if students were late. So, we rushed back home to change, only to find out that we did not had keys to our house (the girl’s apartment). We were in singlets, baby-Ts and shorts – not the appropriate ward-attire, huh? Kuan Geok had like very short shorts, with flowers somemore! So, we were in the dilemma of whether to go back to the restaurant to get the keys. But, that way, we’ll never make it in time. Then QKK, came up with a super smart idea – pinjam my housemates white coats la, he said, no one would notice.. the doctors would think you were wearing blouses with skirts.

Having not much choice, we followed his ‘super smart’ idea.. I still distinguishly remembered, the moment I put on Hong Tee’s oversize long sleeves white coat, everyone in the house burst out laughing.. They said we looked as if not wearing anything underneath, like some flasher or something, sigh… my coursemates have weird sense of humour.. =( and NO, no pictures! *pout*

Anyway, I exchanged white coats for one with short sleeves.. looked more ‘normal’.. Cheryl borrowed Chee Soon’s White Coat, which was pretty funny as well, as later she noticed that it lacked 2 buttons! Haha!

Upon arrival at Surgery Ward 1, we found ourselves early, and had to wait for Mr Vasu. Guess what? We passed the Lingesh test! Yeay!! He didn’t notice our attire… (Lingesh, if you were wondering why we were acting rather weird the other day, now you know why la…. Hehe… you were right, we used to be more enthusiastic in the wards).

To think back, I think, we were all very childish that day.. i mean, would it be unprofessional for doctors or medical students to dress up in singles/spaghettis and shorts in the wards?? Hmm.. maybe I should post a poll on that.. hmm.. don’t get me wrong.. I always wear formal attire to the wards.. (except the time we got locked out) At least, we were trained to do so.. the guys even had to wear neck ties despite the hot weather.. THANK GOD HUKM is air-conditioned =) I wonder what about other universities.. perhaps, private universities are less strict about their dress code, no?

Our last day here… was already in the ‘going-home’ mood.. I successfully inserted a branula for a 9 year old kid, and he said it was not as painful as expected… *happy*… talking to kids and distracting them, really works! I think branula insertion is an addiction…

i saw anew admission with a patient with over 90% burns at the burn unit. The patient don't really feel the pain anymore, with the epidermis and dermis layer burned, most of the pain receptors were dead as well.. He was suffering from multi-organ damage.. You can see fluid oozing from his body.. It was an occupational accident where he accidentally fell into the hot water tub in his workplace.... and he was only 25 years old... so sad..

Oh yes, I have 2 very interesting Xrays for you: We saw this at the wards, 70 year old, Chinese Man came in with abdominal pain, in shock. 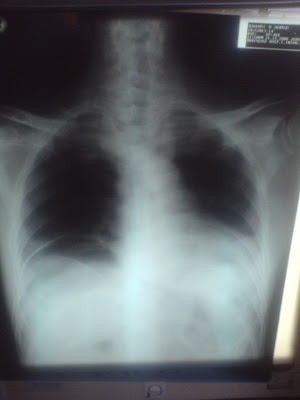 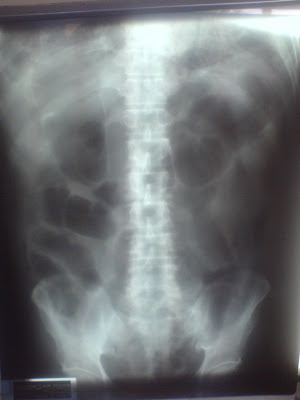 (can you see what it is? - answers in comment)

We had Mc Breakfast at the new McD in Teluk Intan. Yes, you heard me right, there's a McD in teluk Intan!! yeay! it opened last Saturday! 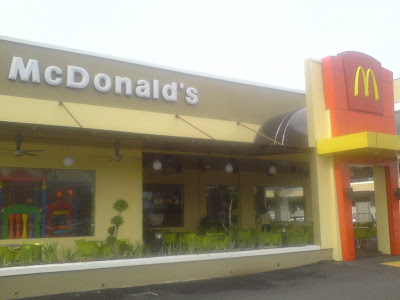 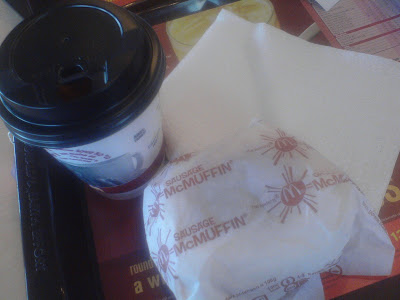 The RM4 Mc Breakfast set (i took tea instead of coffee)

Cheryl, QKK, Soong Joo, and I took the 3.30pm bus home… yippie… can’t wait to be back for Christmas!

I think I might actually miss you.. but I doubt I’ll ever be back.. =P

confessed by confessions of a medical student Time Of Birth 10:10:00 AM

Email ThisBlogThis!Share to TwitterShare to FacebookShare to Pinterest
Classified at Hosp Teluk Intan, Confessions of a medical student-Final year, ranting