the dream for a longer penis...

An interesting article from The Star..


Welder put out of nut misery 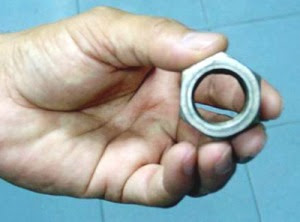 Solid metal: A nut similar to the one that was removed from the welder’s penis.


Sunday August 31, 2008, JOHOR BARU: The welder who was hospitalised after he used a nut to elongate his penis was finally put out of his misery when doctors removed the offending spare part.

It is learnt that staff from the Hospital Sultanah Aminah drained out some of the blood and cut away some skin on the upper layer of his organ to remove the nut.

The 20-something welder was trying to increase the length of his penis ahead of his engagement next week by weighing himself down with the nut when the nut got stuck following an erection.

Director Dr Daud Abdul Rahim said doctors got the nut off at around 11pm on Friday.

“The patient is now recovering and we hope to discharge him today,” he said.

Dr Daud declined to say whether the patient would suffer any long-term injuries.

The welder, who works in Singapore, but is from Taman Sri Skudai, sought treatment at the hospital on Thursday afternoon after he was unable to get the nut off himself.

Both hospital authorities and the state Fire and Rescue Department were involved in attempts to remove the nut.

This is the second case in the past week involving objects stuck on penises.

On Aug 25, firemen were summoned to the University Malaya Medical Centre in Kuala Lumpur to cut a steel ring from a patient’s penis after numerous attempts by doctors failed to dislodge it. 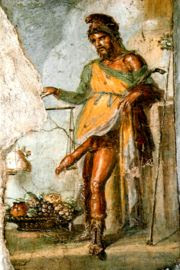 Fresco of Priapus from Pompeii. Depicted weighing his large erect penis against a bag of gold. Ancient Romans admired the large penis of Priapus. 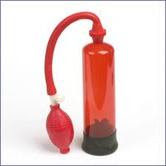 A penis pump is a cylinder that is fitted over the penis, with a manual or motorized pump to create suction. As the apparatus creates a vacuum around the penis, blood is drawn into the penis, helping it to become engorged. As vacuum increases, the difference between the inner blood-pressure and the pump pressure increases as well; excessive pressure causes vascular damage rather than a harder penis.Pumping must be done very carefully to avoid injury. Over-enthusiastic pumping can burst blood vessels and form blisters


FACT: According to Psychology Today, which surveyed 1,500 readers (about 2/3 women) about male body image. Many of the women were not particularly concerned with penis size and over 71 percent thought men overemphasized the importance of penis size and shape. Details were examined among the women with a size preference. Generally women cared more about width than men thought, and less about length. "...the number one reason women preferred a thicker penis was that it was more satisfying during intercourse." It's suggested this is because a wider penis provides more friction to the clitoral area while a longer penis reaches an area less stimulable.

COMMENTS: I wasn't sure whether to laugh or to cry when reading this article from The Star... Some people would do anything to satisfy their other half.... even painfully embarrassing things..
confessed by confessions of a medical student Time Of Birth 11:21:00 PM