I was wondering whether I am still ‘allowed’ to blog about bimbo-tic stuffs. You know, like when North Korea is busy launching its rocket, Thaksin leading another protest, the huge hoo-haa about Earth Hour, And all I care ( or worry) about was my hair, or scratching my nail polish. Yeah, having a blonde moment and all.

But I guess, it’s okay. If not now, when else? If not here, where else? When I start working, I would have to put a professional upfront and remain all composed and mature. (and somewhat boring?) So ya, today I decided to resume blogging, however bimbotic I may sound… at least for a while before I start work… if that’s okay… whatever...

So ya, I was saying. The bimbotic part of me is currently worrying over her hair. Guess what? On the day before the Dean announced our pass-fail list, which was supposingly the superBIG-est moment of my life; you know, it’s like when you are proposing to someone and waiting for the ‘YES, I DO!’ part,... so ya, on the day before that life-changing-event, I did something stupid. I added 10 years to my age.

Okay, if you were wondering how it was possible, well, I went to the nearest hair-dresser, and trusted the hair-stylist.

A day before that the waiter at Tony Roma was demanding for my identification card when TYP ordered some beer (what, am i 18 or something?) and post-event, Cheryl's friend, Dan-Dan guessed that i was 28. So, isn't that 10 years?


Anyway, I went to T & T @ Bandar Permaisuri. I wanted to curl and dye my hair (finally, since the exams were over and all). So, I was introduced to Siang, the hairstylist. And oh boy, did he had opinions, lots of opinions.
‘I want my hair curled, like this (pointing to a mag), big curls especially at the end’ I said in Cantonese.


‘Why curl? Wave is more popular now’, he replied, showing me a few pictures from another mag.

‘but I want curl. I wanted my hair curled since a long time ago’ I said. *blink* *blink*


‘like you said, a long time ago. Now not nice anymore. Your hair is too little for big curls. It would look like the end of a horse’ he insisted.

‘Curls are very hard to maintain. I used to live in Japan, and the girls there wake up 2 hours earlier to do their hair. If you can promise me you'll do that, then I’ll curl your hair for you’ he said, and continued sharing his experience in Japan.

‘Hmm… should I just do rebonding instead???’ –ALAMAK! that was me giving up in the argument, and the indecisive Libran overpowering me.


‘Huh?' *scratch head*' What’s the point? Your hair is straight already!!’ he said. - I think he almost pengsan.

So, he took nearly 15minutes to persuade me to have my hair ‘wavy’ instead of ‘curly’. Never have I seen a hairstylist who is THIS PERSISTENT. So, in the end, I settled for one of his suggestion, something in between. He said that he’ll give me something which I could style into curls, or change them into waves. And it’ll last longer too. Being shinyin, I thought he was a genius. So, he curled/waved my hair. I asked why he did not use digital perm, but did the normal perm instead. 'Digital perm too fake', he answered. I was wondering wasn’t digital perm supposed to be better? With less chemical used and all? I could not be sure.

‘Can I cut your hair?’ he asked politely.

‘No’- my instant reflex answered.
I thought I sounded a little rude, so I tried to explained, ‘I used to have my hair up till my waist line, and I just had it cut last week to shoulder length. I wanted only 2 inches shorter but the hairstylist (who was really good at Maths) did it 5 inches shorter. So, I really don’t want it any shorter’.

‘Oh I see’ he nodded understandingly. ‘but if cut some, easier to curl’ he added ‘ just an inch, this much’ he bargained.

After 10 minutes, I saw this on the floor. 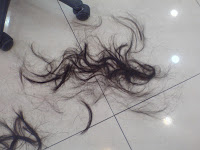 i don't think this was anywhere near one inch though.... 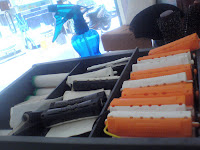 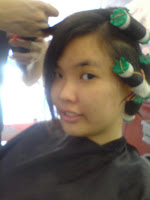 *the curlers looked very funny on me* 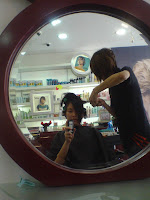 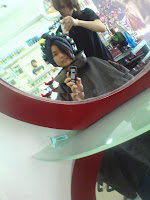 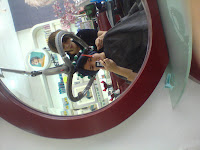 *then, use this heating machine~
damn HOT wehhh...
i dare not move an inch as i was scared it might burn my face*

This suffering part took a while, a long while... 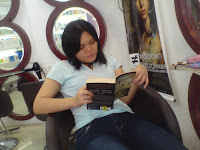 Thank God, Cheryl was there to teman me...
and helped me with some decision making.. 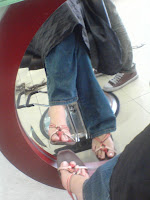 this was me, waiting not very patiently... 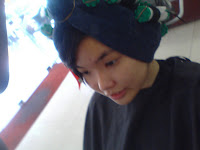 When he was washing off the chemicals off my hair, I commented, ‘not many people to day, huh?’ He replied, ‘I don’t know. Today is my second day at work’.

My heart was shattered.

I couldn’t believe that I rest the fate of my beloved hair on the hands of a newbie, a two-day newbie!! I guess it must have shown in my eyes, the fear.

He tried to reassure me ‘I used to work in another salon, a bigger one. The salon had more customers.’ ‘Why did you changed jobs?’ me being a busybody. ‘The boss was crazy, make me count stocks and work till 2am without being paid for overtime. Then scold me for being late the next morning,’ he said. ‘I didn’t like it’ he added.

That did not offer much comfort. Great! How could I have trust a newbie hairstylist aka previously storekeeper? I was already expecting the worse. Fine, I could always do rebonding if I don’t like it, right? It’s not like un-save-able or anything.


‘How do you like your hair dyed?’ He asked.

‘Do you have a colour chart?’ I answered with a question, being very careful this time. No one mess up dye colours, right? Just choose the colour, apply and smile.


‘No colour chart? I thought I was supposed to choose the color’ I said.

‘I don’t use colour chart. I mix the 3 colours together. It makes the hair looks more natural’ he replied.

From the mirror reflection, I could see that he was already mixing the colours.

‘Okay then. Just give me something copper-red. NOT TOO BLONDE. I don’t want to look bimbotic and all’ I said. But I guess, he already had the colour mixed and was already applying them on my hair.
Fine. Do whatever you want to my hair, I thought.
Was God playing a trick on me? I wondered.

Finally, he was done. He had Michelle to help him with the dye. After that, Michelle helped me washed off the dye. I wondered whether she sensed my worries and doubtfulness towards this newbie. She gave me a nice massage while washing off the dye solution away from my hair. It was perhaps, one of the best massage I had ever had, not that I have many to compare though. I felt a little better after that. She gave me a simple hair treatment after that.

Finally, having my hair wrapped in towel, I when back to my seat. He toweled dry my hair. ‘Why the curls doesn’t look curly?’ I asked. At this point, I might have been rather annoying I guess, hehe. ‘Coz it’s still wet,’ he still had the energy to entertain me. ‘It'll be beautiful after I blow dry it’ he added confidently. He reached out for the hair blower and did his magic. I closed my eyes a while and tried to relax myself. The warm air brush against my face, soothing and reassuring.

The blower stopped. I opened my eyes. And guess what?


I saw Prof Adeeb staring back at me.


I almost shouted. Almost.
I was so in shocked that no voice came out.

I guess he was rather in shock too, as he observed my reaction.

I started fiddling with my hair. He started to panic, and tried to save my hair. He applied a generous amount of gel on my hair, a very generous amount. He tried shaping it to perhaps what he had visualized in his mind. Making it less fluffy. After a while, he looked rather satisfied with his creation. I wondered whether he was faking the confidence and satisfaction to reassure me, to calm me.

He taught me various techniques on how to maintain my curls, how to make them wavy, how to style them. However, I was too ‘in-shock’ to absorb anything. ‘You can always come back few days later, if you are not sure how to style them. I can show you again’ he said as he passed his name card to me. He being nice made me feel a little guilty. Now, thinking back, I guess I was over-reacting, and perhaps being a little cruel to the poor guy.

To quote a few…


I told Cheryl this and she said : Curls memang more mature one. (generalization) Last time, I did my curl also like that.

Su Yin: WHAT HAPPENED TO YOUR HAIR???? *eyes open widely* Is it permanent?? Luckily it’s not permanent… curls doesn’t suit you…

(walau, now, I feel really bad. So I went back to my room, and try ‘fixing them’ – helpless) I feel like crying liao.. I can’t believe I paid people to destroy my hair.

After that, I get better ones. May Luu said : Where got like Prof Adeeb? You think Prof Adeeb’s hair easy to style? That a-mah hairstayle damn classic weh.You should have curled your hair way earlier. Don’t look so boring.

So, I felt better, a little.

Well, the funniest comment I heard was from Mr Ooi : What happened to her? Why suddenly do so drastic thing?


I didn't take any picture until the next day, when i was less traumatized...
Behold, Prof Adeeb Jr.. 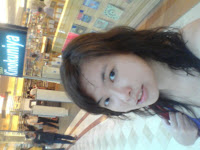 
So, that was my long story at the hairdresser...

Email ThisBlogThis!Share to TwitterShare to FacebookShare to Pinterest
Classified Confessions of a medical student-Final year, ranting, shinyin being stupid