my childhood dream was to be a doctor?

Remember the last time I told you I met my good old high school friend, Lee Eei, on facebook? How we lost touch for 8 years… and suddenly, out of the blue, she found me on facebook, and how I thought it was a miracle? She helped me recalled those days we had at my first camp... how i was a little girl, following her around, and she would take care of me and Shin Loo, like a big sister...

Well, guess what? This time, Facebook did something even more amazing… I found my standard one friend, someone I lost contact 17 years ago!! S-E-V-E-N-T-E-E-N YEARS AGO!!!! can you believe that? That's over a decade and a half... What can I say? - Facebook does wonders!

It’s really nice, I guess, when you get in touch with really old friends… really, really old friends, and see how much they have changed over the years… Guess what? And I never knew I could learn so much about my childhood from these friends. So, I learned something very interesting today. I managed to retrieved this piece of memory which I had lost.

You know, when we were little, and our teacher used to ask us the MAJOR question: 'What is your ambition? What will you want to be when you grow up?' And with our limited vocabulary, we would try to give her a satisfying answer, at least something good enough that she would nod, and call the next person. And when you finally give her an answer, she would demand for another two, perhaps just in case we didn’t get the first.

So, there we were, two 7-year-olds going through the pictures in the little ‘kamus bergambar’, stopping at the page labeled ‘Occupation’, looking for the right answer, while Puan Tan called out the names, one by one.

I learnt that I was rather indecisive, even during Year One, as when Puan Tan reached the alphabet ‘W’, I was still struggling to decide which occupation to select. So you see, my indecisiveness was in me, even when I was a child, days before I knew the word ‘libran’. (So, to my friends whom had often said that I used Libran as an excuse, see, it’s not an excuse, indecisiveness has been there ever since I was a kid!! Even before I could remember!)

His name was before mine, my old friend, and he answered: sailor, engineer and pilot. And then it was my turn. Guess what? I answered DOCTOR!!! Yup! That’s right! At least that was what he remembered. So, today I learned a fact from a very old friend who had changed my life history. So, I wanted to be a doctor when in standard one!! (So, the answer to the question in my facebook quiz had not been accurate) and of course, my previous posts (namely COAMS #1) were all wrong as well! Geezz…

So, yuin loi, I wanted to be a doctor when I was a child, when I was in Standard 1... It probably would not be surprising though, because I think, apparently, half the class wanted to be doctors too... it seemed to be the 'right' answer that time, I guess... How ironic can it be? While I was pondering all this while, over the past 5 years in Med school, wondering whether is this what I really had wanted... and only after I've graduated, I found out that it was indeed what I wanted back then... haha! God is really funny...

Oh yes, my friend did lived his childhood dream too, he became an engineer...

So, do you remember what you wanted to be when you were in year one?

By the way, my friend sent me some of our class photos during my Standard 1 days… and if you promise not to laugh, I’ll show it to you… I looked rather grumpy in those pictures… i wondered why didn't i smile to the camera... and yeah, I had those thick rimmed glasses, huge thick rimmed glasses… Coz my dad had this belief that the bigger the glasses, the more you see… and I actually believed him for quite a number of years… until I learn about optical point and all.. but that’s another story…

There you go, those pictures from 17 years ago! 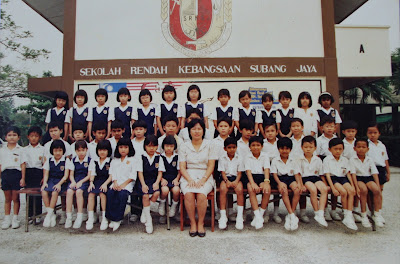 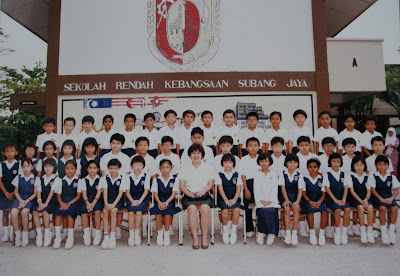 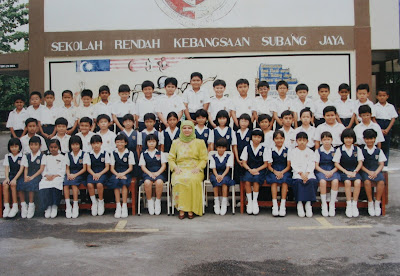 Standard 3 SRK Subang Jaya
Click the pictures to enlarge it..
I found out that i hadn't developed the subconscious lateral gaze yet...
(if you know what i mean, haha!)
you can try to find me, if you like,
no, i won't tell you which though =P

p/s: Oh yes, i learned another thing too, yuin loi the students in each year are the same...
they don't shuffle students back then...

confessed by confessions of a medical student Time Of Birth 1:53:00 AM

Email ThisBlogThis!Share to TwitterShare to FacebookShare to Pinterest
Classified Confessions of a medical student-Final year, stories from my childhood