Most miserable 2 and a half hours of my life! 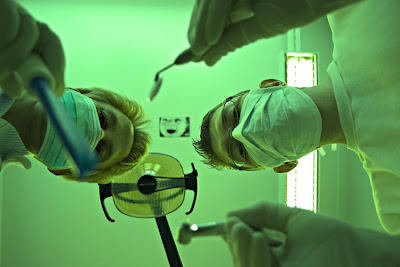 I have a terrible toothache. I can feel as if my face is asymmetrically swollen. The pain, intense, that I cannot clench my teeth, or close my mouth. Eating has became a torturous luxury. The regular drugs and cold therapy did not offer much relieve.

This toothache did not come suddenly. I would have to flash back 2 months back.
~2 months ago~
So, on the first week of Medical posting, I had some free time. So, honey and I decided to see the dentist. I wanted to do some scaling. I liked the feeling of my teeth feeling all sparkling white after scaling, you know, with that -‘shing’ *blink* *blink* feel..

Upon arriving at the dentist, a quick examination was done and I was told that I had some tiny holes in my teeth. So, the doctor, she asked whether I would want them filled. Well, the holes were not causing any pain (at all!), but the doctor was very convinced that in a matter of time, it would. Besides, being human, when you were told that there was a problem somewhere and that problem can be fixed, naturally, you say, ‘okay’. So, that was what I did.
The doctor gave me a number and sent me upstairs. I was approached by a cute, sweet girl. She introduced herself as a third year dentistry student. Let’s call her DS (Dental Student). She wanted to take some history, so, I agreed to her. I know how it is like, being a student, I mean,after all, I AM a student. So, we should never reject one of us, right? What I did not know was a dentist had to take such a long history, and a couple of other things. The history included past medical history, past surgical history, allergy history, family history, social history, etc… almost similar to the history that we, medical students take.. only that it was more superficial, and they had an additional: past dental history.
Later on, DS sat me on the couch. The next thing I saw was she, reaching out for the handpiece. Then I was like, *blink* *blink* - OMG! are YOU going to do my fillings for me??? YOU of all people??? NO WAY!! - My heart was screaming aloud: But I thought you were just a 3rd year.. where are your seniors? where is your supervisor?? Have you practiced on enough fake teeth or models? Shouldn’t your supervisor be supervising you??? What if you introduced a focus of infection or injured some nerves?? I don’t know… millions of thoughts ran through my head, millions, clouding, debating through my mind, so many that I cannot tell them apart, which was true, which wasn’t. But one dominant thought stood out: ‘TRUST THAT GIRL!’ –which 2 months later, I totally regretted…
Actually, it did not take me 2 months to regret. 2 hours later, I was already regretting,. 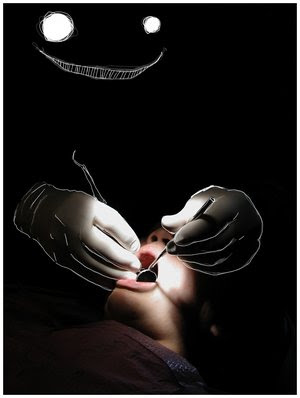 (picture by kizioko)
DS tied some metal ring around my teeth. Then put a frame around it. She tied a pink sheet of plastic cloth across it, sort of making a tent. I suppose, that was to reduce the risk of infection, by creating a barrier between the saliva, which is rich in organism, and the operating site.
I CURSED THE PERSON WHO INVENTED THIS DARN TECHNIQUE!!! (I mean, we can’t always put the blame on the small girl, can we?) WHO INVENTED THIS TECHNIQUE?? Have you ever, EVER considered the misery of having your mouth opened for 2 and a half long hours, and having your mouth numbed? The saliva all accumulated, stucked at the back of the throat, no suction done… and for asthmatic patient like me, nothing scares me more than the feeling of not being able to breathe, the feeling of overflowing saliva clogging the airway.. how miserable it was….
You can give me statistics of studies, researches on how great it had reduced the risk of infection, blah, blah, blah,… but still, from a consumer’s point of view, this is a stupid, miserable technique!
So yes, I CURSED THE PERSON WHO INVENTED THIS TECHNIQUE!
Guess what? This process was not the worse thing, not yet.. Each time she accidentally touch my gum with that horrifying handpiece, I would wince and let a cry of pain. Okay, maybe I did had a very low threshold for pain, but was I SUPPOSE to feel pain??? Didn’t she just inject some local to numb the pain?? Why the hell was it still painful????
And guess what? Despite the pain, shinyin actually persevered… with this mental thing going on: 5 more minutes, don’t panic… it’ll be over soon.. this is a dream~ you are on a beach~~ breathe in, breathe out~ I tried the relaxation techniques and every possible CBT I read from my psychiatry textbooks.. I would even hypnotize myself if I knew how… ‘sabar’~~
And later on, I heard the scariest vocabulary ever existed in the English Dictionary: ‘OPHS!!’
And DS started stuffing my mouth with gauze and cotton.

I think at this point, I was allowed to panic, because,... she did.

I wanted to ask her whether is everything okay, but you see, my mouth was fixed in such position I could not talk, and I was literally choking on my own saliva, and something which tasted somewhat like blood.
DS disappeared from the cubical and came back with her supervisor.
This was when I started cursing the girl too.

The supervisor took a look at my teeth, shook his head and started lecturing. You should NOT have used that, that, that... You SHOULD have done this, this, this...This ring was of the wrong size and type. You SHOULD have used this, this, this instead. You should NOT have done this tooth first, instead you should have done this, this, this…. And later, he was even quizzing her on what were the consequences of her action.. and there she goes rattling a list of scary possible outcomes, which (touch wood!) I hope would never come true!!
OH MY GOD!! Would you stop scolding your student and come save me???
So, after that session, which seemed like eternity, he taught DS what should she do – ‘remove everything, and close it with a temporary filling’.

–huh? WTF??
So, I was miserably left alone with DS again, to clean up her very own mess… guess what? I get to go home with some pain killers –hooray! She gave me an appointment the week after. 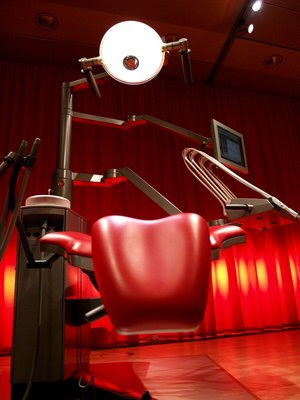 (picture by FvT)
And do you think I would ever be SANE enough to go back?? I mean, if you had just escaped from Hell, and given a follow up one week later, would you go???
So, 2 months later, I suffered from the consequences of defaulting follow up.
Awww…. How my tooth hurts badly…
p/s: Bernard, you junior can be my worst nightmare!
confessed by confessions of a medical student Time Of Birth 2:38:00 AM